Somewhat belated, but here are some photos of my site for the Field Day.

Well, this afternoon I finally had success with receiving some 600m signals from Dale (VK1DSH / AX2VKZ). This was as a result of deciding to finally just try and throw up a long wire antenna. Not aiming for an ideal one, just anything better than the stereo's AM loop antenna. The difference was immediately noticeable!! Before I could not even see Dale's signal on the waterfall, but now the screenshot shows the story I think!!

The wire at its most is probably about 5m off the ground, but for most would be luck to reach 3m above ground.

Wow, they're quick. I ordered my softrock yesterday, and woke today to find a notification in my inbox saying it's already shipped!! Exciting.

Oh, and they're quick in another way – all the softrocks are sold out again.

Well, I'm still keen as mustard to have a go at SDR, but have been struggling to get one of the Softrocks – due to availability. Although recently, the "SoftRock RX Ensemble II Receiver Kit" was up for sale but sold out in the same day. (UPDATE: Just as I was writing this I went and checked again just in case, and the Softrock Lite II was up for sale again. It's ordered and now I'm hanging out for it to arrive!!)

So while looking around at other things (WSPRnet actually) I came across mention of the ZetaSDR. I therefore did a search and came across the even simpler TinySDR by LY1GP on the same page – and first at that. It's a very simple direct conversion receiver consisting of nothing more than three parts:
1) Simple LC band pass filter;
2) Mixer; and
3) VFO.
No AF amplifier stage, it just feeds the output direct to the sound card MIC input and leaves it to do the amplification etc. Oh, and the VFO is coupled into the mixer via a phase transformer thereby providing two different phases – one at 0 degrees and one at 90 degrees – and thereby making the output that of (I believe) an IQ SDR receiver – like the Softrock (albeit, not as 'advanced').
So this all looks very simple and something I'm tempted to try. But I'm not equipped antenna wise for 80m, and also don't have an oscilloscope for testing etc. However, I figure if I just change the band pass filter at receive and a couple of other points (need to look closer at the schematic) I think I might be able to make it for 40m – which I am equipped for. Plus, I've been considering getting a oscilloscope but haven't had a big need just yet – but now I might….
Anyway, I'll give it some thought and see where I end up. it could be a great project to further solidify some of my study for my license upgrade… (As could the Softrock when it arrives – I guess that could be a few weeks though.)

Well, today's lunch time net was a no event. I was up on top of Black Mountain calling CQ but with no answers. So by around 12:40 I had headed down and went home for lunch, only to briefly hear VK1KLB while driving down the Tuggeranong Parkway – but unfortunately reception was poor and I lost him.

I think I need to resume sending out reminders to the VK1 Reflector prior to the day – I'll try and remember to do that next week.
But today I have also finally ordered the bits I need for my PA0RDT mini whip – specifically the J310 FET and substitute for the 2N5109 transistor (I went with a 2N2219 and a 2N3053 for back-up as I know VK2DDI has had success with that). Hopefully they'll get here within a week or so…
(Oh, also ordered a couple of bits towards building another CMoy headphone amp.)

As mentioned previously I was reading up about the PA0RDT mini whip. The hope was that maybe by building one I could at the very least receive some WSPR traffic on 600m – and hopefully more general traffic. (I've also started to consider the ideal of creating a T/R relay switch so that I could use it for reception on the HF bands if it proves as good as I've heard.)

Well, with some guidance from the guys on the 600m mailing list, today I kicked off in earnest by completing the Power Feed Unit (PFU). The PFU is what sits in the shack next to the receiver and then sends power up the coax to the mini whip for it's active components.
Now I just need to order the active components so that I can get started on the actual mini whip (the transistors are proving a bit tricky to locate), but I did also prepare the PCB for it today – photos below.
Anyway, enjoy the photos and I'll be sure to post up more as I progress further. 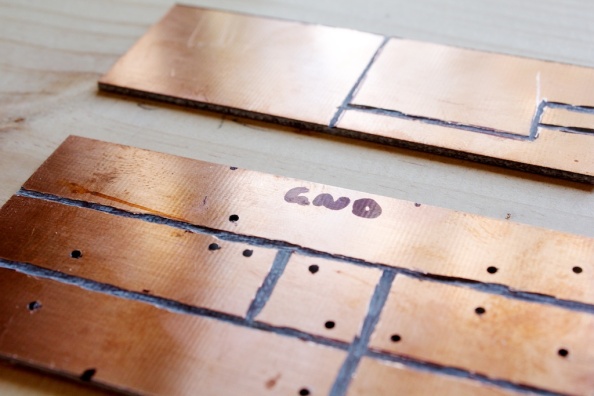 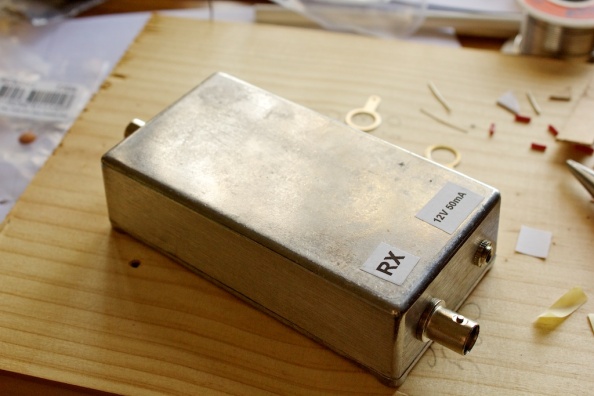 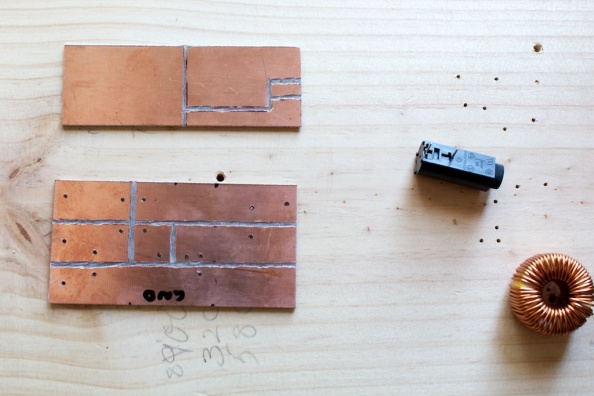 Well, finally, something I started before the Summer VHF/UHF field day is now one step further. That's right, today I finally finished shapping my guy ring (a reminder, it's made from wood) and therefore applied the first coat of varnish. So, who knows, maybe this week-end I'll apply the final 3 coats and then it will be done!

Also worked on my PA0RDT mini whip today, but more on that shortly…

Well, seeing my dipole is for 40m/15m I thought I'd participate in the currently WSPR planned propogation activity for 15m. Received some big DX signals: